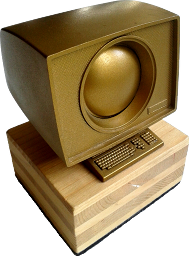 Ahoy! has been awarded Hack of the Month at Berlin Hack and Tell #23. Read about how it went down here.

Considering the recent confirmations regarding the Orwellian environment that Internet-based communication is apparently happening in, it's time to think about alternative ways of communication which do not involve the Internet. With current technology in place, which alternatives are there?

Ahoy is an Android App which allows for local, broadcast-style communication. You can broadcast a message using your phone and people around you will be able to see the message on their phones. They, too, can broadcast messages or choose to repeat your message to extend its range.

Messages are compressed and encoded as WiFi access point names (SSIDs). While this approach allows for very short messages only – so short, in fact, that it makes Tweets look verbose in comparison – it has a number of interesting properties:

Although in practice, SSID may only contain a handful of ASCII characters, Ahoy can be used to send messages in any language, using any script defined by Unicode. However, message lengths vary depending on the language a message is written in. Specialized language packs which employ Huffman coding are used to maximize message lengths for most languages, resulting in message lengths of 45 to 55 characters on average. Ahoy chooses the most compact encoding automatically, falling back to UTF-8 or UTF-16 if no appropriate language pack is available.